The newly opened paint shop has been designed to meet all your safety and environmental requirements. The hall was equipped with a powerful air exchange system with a two-stage filtration system, so that the emission of hazardous chemicals into the atmosphere was minimized.

In order to improve the painting efficiency, the company has also purchased two modern hydrodynamic pumps for continuous operation. They are additionally equipped with a set of replaceable nozzles of different diameters, which allows versatile application of different types of paints.

In the paint shop two basic methods of applying paints are used:

The application of anti-corrosion coatings on large surfaces is achieved by means of modern hydrodynamic pumps. The principle of operation of the device for hydrodynamic spraying consists in sucking the painting product, high pressure piping to the nozzle embedded in a special gun. The nozzles have holes of 0.1-2.0 mm diameter. Paint leaving the nozzle as a result of exceeding the critical speed is sprayed.

Advantages of spray painting with hydrodynamic:

In addition to painting larger elements, there are also smaller jobs that require precise painting of small but complicated surfaces. In such cases the use of hydrodynamic pumps becomes uneconomical, so the spray method is used for painting.

The principle of operation of the paint spray gun is based on compressed air. This is the carrier of the substance to be applied, so spray guns are often called pneumatic guns. The air flows out of the head most often with two symmetrical openings on opposite sides. They are arranged in such a way that the paint and air mixture is sprayed in the form of a cone, the tip of which is the outlet of the nozzle, and the base – the varnished surface. Air is a universal carrier and does not react with sprayed materials, so the range of liquid substances that finish the surface with the gun is very wide. These may include, for example, paints, paints, adhesives, solvents. 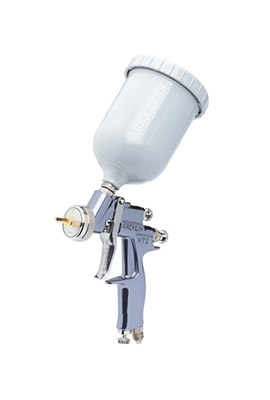